Margaret Atwood is fiddling with China Miéville’s sleeve. It is already rolled above his elbow but Atwood is carefully adjusting it to sit a little better.

“How nice,” says the friend beside me. “She’ll spit on a hanky next, to dab his chin.”

The authors are seated together, waiting for the start of the ‘Wordsmithing’ session at the Perth Writers Festival. We think Atwood is sweet to be so attentive.

Sleeve duly sorted, she reaches into her bag and pulls out, not a handkerchief but a camera. And proceeds to take close-up shots of the tattoos on Miéville’s now clearly exposed forearm. Ahh, research. Miéville looks on with gentle amusement, as if Margaret Atwood documents one’s body art every day. They are clearly comfortable with each other and, as the session progresses, we learn two things:

In fact, we learn many things. The discussion ranges from ancient mythology and pulp fiction to HG Wells and Rudyard Kipling, from political writing to zombies, the future of Earth to films like Mad Max 2: The Road Warrior, Frankenweenie and Avatar.

Wisdom and humour flow fast as Atwood and Miéville riff like long-time stage partners. I, with my rusty shorthand, struggle to keep up. Much of the detailed contemplation of realism versus genre styles, speculative fiction and the treatment of technological modernity falls by the wayside. (Chair Geordie Williamson asks such knowledgeable questions that my head hurts. The authors don’t skip a beat.) But I manage to capture a few interesting observations and some writing advice.

On books changing the world

You are assuming that everybody reads which, alas, is not true. And even if they did read, they are not necessarily reading our books. Sometimes a writer might touch on something that later seems prophetic. It is really more like a coincidence or maybe someone saw the way things may be going. The Handmaid’s Tale became more popular during the latest US elections because of some ill-advised comments by Republicans about women. But you didn’t see anything like that in 1985 when it was published. I don’t think in any way that the book was influencing the election as such. I think it was more used as a touch-stone, a citation or reference to what people were thinking anyway.

The sad fact is it is perfectly possible to be an intelligent, malevolent force in the world and read beautiful books and love them and have them not change your mind at all…Italian fascists for many years loved The Lord of the Rings because they thought it was a tract. I have a lot of problems with Tolkien but that’s not fair. 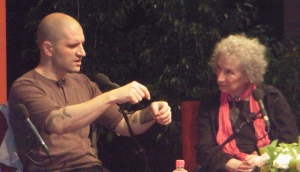 On the origins of speculative fiction

“What is Frankenstein? What is Dracula? There is a whole 19th century tradition of weird stuff that 21st century pulp drew upon. HG Wells, yes, did the other planet and time travel thing. But it didn’t originate from pulp magazines. Pulp magazines were already drawing on an older tradition. I see a lot of this. When I saw Avatar, I said, ‘I know exactly where I am, in a show called Victorian fairy painting’. It’s all there. It’s not a new thing. It was used and expanded by those magazines but that wasn’t the origin of it.”

On humanity being hard-wired to love stories

Even if so, it in no way implies that stories are good things. What if our nightmare existential condition…what if it is our tragedy that we have this innate, bone-deep hankering for stories? Maybe it is like an addiction. Or maybe it is a banality. Like humans are hard-wired to shit. It is my hope that story is poo instead of evil.

There is a thing in Britain called the Bad Sex Award. I think it is a pitiful, mean-spirited, typically English attempt to undermine a genuine effort…any piece of sex writing taken out of context, of course you can laugh at it, of course you can. It is easy to do. I think, in a way, the stakes are high. I would love to be able to write a good sex scene but it is not something I have put my mind to.

It’s because you keep putting tentacles in it.

I feel a little careful about it. It is a good point. I hadn’t been wildly aware of it. I once very foolishly said in the past that I want to write a novel in every genre. Now, everything I do, someone says ‘what about pornography?’.  I’d love to do it (write about sex) but if I do, I’d want to do it well. I’d rather do it less often and well than very often and badly – both in writing and the other.

I switch to a different kind of writing. But if I am already into something and this is happening more often than I would like, I realise that we have got 100 pages in and it is just not working out, you can try changing the person – first, third, second. Try changing the tense – past, present. Otherwise, if you really are stuck, go for a walk, have a sleep, something repetitive that doesn’t require thought, like running or ironing or one of those things.

For those of us who can still run, dear.

At the moment you are writing, no-one will see it, who cares? Think of it as piano practice. I am keeping my hand in.

On revising and editing work

It depends on the book and the moment but, as a rough and ready rule, the more in the voice I am, the less revision I have to do. So often the chapters that are best are the chapters written quickest because I am in the voice. I am always pleased when there is less to do, not only because of the time but because it means I am probably writing better. It is all about getting into the voice at the start of the book. The more successfully I am able to inhabit the voice, the more it becomes intuitive. On a bad day, you do 200 words and you don’t like it but it is down there.

On sources of inspiration

I get my inspiration from China.

The country or me?

Look at this (indicates Miéville). What could not be inspiring about someone with a bunch of insects on their arm?

> More from the Perth Writers Festival

8 Responses to Riffing with Margaret Atwood and China Miéville