Together, with much grunting and effort they pulled the old wooden boat up onto the beach, past the high tide mark, gathered their belongings and looked up at the limestone cliff.

“Do you think this is the right beach?” Athena asked. George just shrugged.  It looked like the right beach there was the wooden jetty, the pine trees and the old boat house.  But he couldn’t be sure until he saw the steps leading up to the house.

“Do you still have the photo?” he asked. He had spent his whole childhood looking at the photo and listening to the stories that his Pappous had told him about the villa, the olive grove, the walnut and chestnut trees and the green pine woods.

“Yes,” she said with a twinge of guilt in her voice.  “It is a bit wet though.” George rolled his eyes and took the photo back from his sister.  It was the one thing he had asked her to do,  just two hours ago, when they had set out on the journey from Thasos Town he said, “Please look after the photo; keep it safe, I’ll do all the rowing.”

He took the photo back, no damage done but he wouldn’t let Athena know that, it wouldn’t hurt her to feel a little guilty; it would be a lesson in responsibility as Pappous use to say.  He looked at the photo, at the old well-worn steps covered in moss leading up to the villa.  The steps that his Pappous had built by hand when he was a young man.  Ironically he was the same age that George was now.  He could never build something as beautiful and permanent as those, he had trouble keeping a permanent job.

“Come on George, I’m wet and cold,” she said. “Let’s find this place before dark.” Her words brought him back to the here and now.  She was right, time to find the steps. George looked up at the cliff; he could see a white washed building through the pine trees, he headed in that direction.

“Keep up Athena and be careful these cliffs are loose,” George directed.  “I don’t want you to twist an ankle.” Athena pushed past him and started scrambling up the cliff.  He could be such an ignoramus sometimes.  But she was thankful that he bought her along, he didn’t have to.

George sighed he should be a little kinder towards her, he thought; after all she hadn’t even met Pappous.  Pappous had decided to move back to Skala Rachoni when their mum was pregnant with Athena.  He thought that with the new baby coming they would need more room.  George knew that this wasn’t the only reason.  Pappous really wanted to go back to where he was born, to smell the pine scented air and to feel the salt air on his face one last time.  So although George had acquired a sister he had lost his beloved Pappous.

George easily took the lead again, after all he was eleven years older than her and as they neared the top of the cliff he noticed that it was getting easier to climb, the loose rocks had given way to a winding path.  George followed the path around a giant limestone cave and there he saw them. 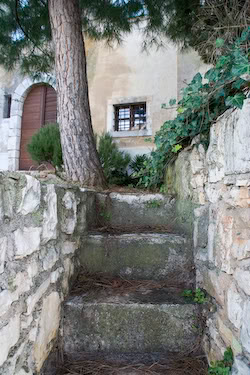 “Look George the steps!” she shouted. They were even more beautiful in real life.  He could see them leading up towards the house winding between two handmade stone walls.  They were rustic, covered in pine needles and moss.  He took a deep breath, there it was, the smell of pine needles, the smell of his Pappous.

With every step he took, memories of his Pappous came flooding back.  Learning to swim down at South beach, it was his Pappous that taught him to swim. They spent hours at the beach, wallowing in the shallows eating cockles together; curing the olives from their backyard by dipping the basket of olives into the sea every day until the flesh became dark brown, then they knew that the olives were ready to be bottled and eaten.

When they reached the old weathered wooden door Athena took the key out of her damp jeans pocket and put it into the lock, but even after the short time that the villa had been vacant the lock had become stiff.  She could feel George looking at her, waiting for her to give up so he could take over, but she wouldn’t, she just had to try a bit harder.  She jiggled the key left and right and then heard the bolt click. The door swung open.

Athena gasped as she looked around the courtyard, “George it is beautiful!” This was why he had brought her, for her childish enthusiasm, and she was right, it was beautiful.  It was just how his Pappous had described it, with the stone fountain in the middle and the walnut and chestnut trees growing along the wall.

George quickly shrugged the backpack off his back undid the buckles and pulled out the urn. “Shall we do it now?” Athena asked hesitatingly. George thought for the briefest of moments and then said, “No tomorrow”.

Tomorrow would be soon enough, then they would scatter Pappous’s ashes over the Aegean Sea and through the olive grove and green pine woods; for now George just wanted to sit and soak up the atmosphere, his beloved Pappous was home and so was he.