Grace, Henry and the Magic Mirror

This story begins with a mirror long, long ago,
with a girl who was known by the name of “Snow”.
It is a story that you may know,
but there is something new I want to show.

Everyone knows about the wicked Queen,
and the mirror in which she loved to be seen.
Of a girl whose lips were Ruby Red?
And who had ebony curls on top her head.

The Queen as you know was very beautiful, but oh so vain,
and she had the magic mirror, very well trained;
to reply to her endless request,
with the sweet words that she liked best.

“Magic Mirror on the wall,
who is the fairest one of all?”
“The prettiest person ever seen,
is none but you, my gracious Queen?”

All was good till Snow White turned eleven,
when the mirror said “On Earth and in Heaven…..
Queen you are full of Grace tis true,
but Snow White is fairer than you.”

The Queen summoned her loyal Huntsman into view,
and gave this ghastly order with no further ado;
“Take her deep into the forest and kill her!”
“Yes, Your Majesty,” was his sad answer.

The Huntsman, although loyal, was kind of heart,
and could not fulfil his gruesome part.
He told Snow White to run and hide,
and he would tell the Queen that she had died.

She ran and ran over rocks and through trees,
through the woods until she came to be,
outside a little cottage oh so quaint,
where she fell down into a lifeless faint.

The cottage as you know, belonged to seven Dwarfs,
and when Snow White awoke she went in of course.
The Dwarfs returning from digging gold in the mine,
found her sitting at their table ready to dine.

The Dwarfs were enchanted at once,
by her beauty, kindness and brilliance.
She told them her sad, sad tale,
they said “You must stay, keep house and all that entails.”

So there she stayed safe and sound,
and the Queen thought she was no longer around.
Until, one day as is the custom,
the Queen asked who was the fairest in the Kingdom 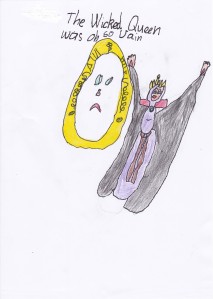 “You my Queen are fair tis true,
but Snow White is still a thousand times fairer than you.”
Was the answer that the mirror gave,
“She dwells with the Seven Dwarfs not in a grave.”

The Queen flew into a rage,
and locked the poor Huntsman in a cage.
She shouted “This cannot be….
if I want her dead it will have to be me!”

Three times the Queen tried to kill Snow White,
first with a ribbon tied too tight.
Second with a poison comb in her hair,
but each time the Dwarfs saved her with a little care

The third and final try,
was with an apple that the Queen asked her to buy.
One small bite was all it took,
and the rest as you know is ancient history in a story book

Now in a glass coffin the beautiful princess did lay,
for a long, long time, five years and one day.
Until a handsome King travelling through the land,
saw Snow White and thought that she looked grand.

“You must let me have her!” the King pleaded.
And off to the castle his horse and cart speeded
Luckily while carrying Snow White a servant tripped,
and out of her mouth the poison apple slipped.

Snow White awoke and into his arms she flew,
they fell in love, which was easy to do.
The prince stole love’s first kiss,
it was so romantic, she could not resist.

The happy couple the next day were wed,
they invited the wicked queen but in fear she fled.
Not wanting to let the castle go to waste,
the new Queen and her love moved in with little haste.

Now this is the part that you might not know,
sit back, relax and enjoy the show.
The big old castle was very empty,
It needed to be filled with children and plenty.

The new Queen was soon blessed by not one but two,
with skin as white as snow, it’s true.
Lips red as blood, hair black as ebony,
one she called Grace and the other Henry.

One day around the castle the children played,
when into a mysterious room they strayed.
There they found a dusty old mirror,
which they wiped off so they could see clearer.

Looking in the mirror gave them a shiver,
but luckily at that moment they were called for dinner.
The mirror they tucked under Henry’s arm,
“Let’s ask mother,” Grace said. “It can’t do any harm.”

The Queen saw the mirror in one glance,
and immediately fell into a trance.
“Give me that mirror!” was all she said.
Her cry filled Grace and Henry with dread.

“Magic Mirror on the wall,
who is the fairest one of all?”
“You my Queen are fair of face,
but no one is more beautiful than your daughter Grace.”

Across the Queen’s face jealousy and anger did flicker.
“More beautiful than me,” she did snicker.
Grace and Henry ran out of the room in fright,
this was not their mother, this wasn’t right.

Where could they go? What could they do?
History does repeat itself but who knew!
Out of the castle they fled,
into the deep dark forest they sped.

They ran and ran over rocks and through trees,
through the woods until they came to be,
outside a little cottage oh so quaint,
where they fell down into a lifeless faint.

That is where the Dwarfs found them,
and woke them with a polite “ahem”
The tale they told sounded all too familiar,
and filled the Dwarfs with a dark anger.

“Right, time to rid the world of this menace!”
They all cried with a mighty boldness.
“Let’s destroy that mirror once and for all…
no longer will it be asked …Who is the fairest one of all?”

Seven plus two stormed off to the castle torches blazing,
their boldness and bravery was truly amazing.
Along the way they sung “Heigh ho Heigh ho….
it is off to destroy the cursed mirror we go!”

Into the castle they gallantly strode,
up the stairs to the Queen’s regal abode.
Their they saw the Queen smiling at her reflection,
rambling about her evil intention.

“Wait,” cried Henry “We need a decoy.”
(He really was a very clever boy.)
The Dwarfs ran back down the stairs,
and just one knock, drew her down from her lair.

“Quick!” shouted Henry “Break the evil curse.”
And Grace quickly pulled a hammer from her purse.
She cracked the mirror with one mighty blow,
and a spine tingling howl could be heard from below.

Down the stairs two at a time the children rushed,
“Oh, Mother, what have we done?” they both gushed.
Snow White awoke from her trance
and she looked at the children with sweet love in her glance.

That is where this ancient tale ends,
a tale of a mirror, Henry, Grace and friends.
Let’s hope that they all live happily ever after,
with many years of joy, love and laughter.

1 Response to Grace, Henry and the Magic Mirror